Hi, what are you looking for?

Ed Sheeran has expanded his ‘mini-village’, buying a fourth neighbour’s house after she objected to his extensive building work.

Most of us with nagging neighbours have to put up with it and hope for the best but if you’re Ed Sheeran, you can just buy their house off them to make the problems go away.

Ed’s been working on building himself a mini village after buying up a fourth house next to his farmhouse – which also gets rid of the problem of his neighbour complaining about his building works.

The Cross Me star, whose new album No. 6 Collaborations Project went to number one without promo, initially bought his £895,000 farmhouse in Framlingham, Suffolk in 2012 and has spent a total of £3.7 million buying up properties around his home… which means he’s also dropped over £350k on stamp duty too. Yikes. 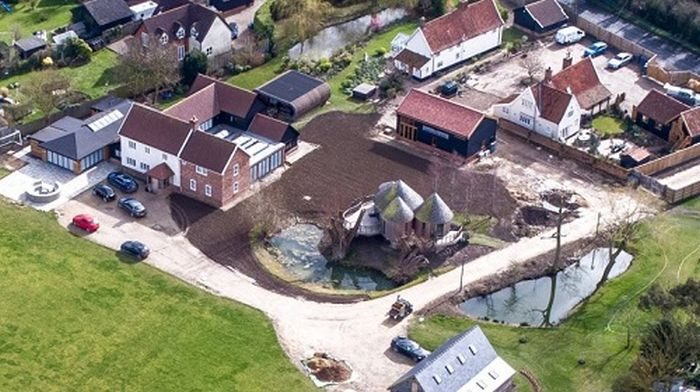 The newest house had belonged to his neighbour, Sharon Jenk, who had complained about the building works going on over at Casa Sheeran.

He purchased the house in April after the neighbour had objected to his plans to build a tree house and a 32ft chapel in the grounds of his home.

Ed, whose net worth is estimated to be a huge £160 million as of 2019, had already installed a pub and a ‘wildlife pond’, which neighbours claim is actually a swimming pool in disguise – something he recently fenced off with a bunch of haybales.

The singer, 28, chose Framlingham to make his home after growing up in Suffolk, and meeting his wife, Cherry Seaborn, at school there.

He’s been plagued by complaints from neighbours about planning applications, including building works on his chapel being put shelved as not to disturb a protected population of great crested newts in the area.

Sharon Jest had also objected to his treehouse in 2013 on the grounds that it would ‘rise above the existing hedge and look directly into our property’, something which is less of an issue now Ed owns that property too.

In this article:Ed Sheeran, Hollywood

Lagos lawmaker Desmond Elliot has said that the Federal government needs to ban the importation of foreign movies so that Nollywood can grow. In...